The store will not work correctly in the case when cookies are disabled.
Lifestyle 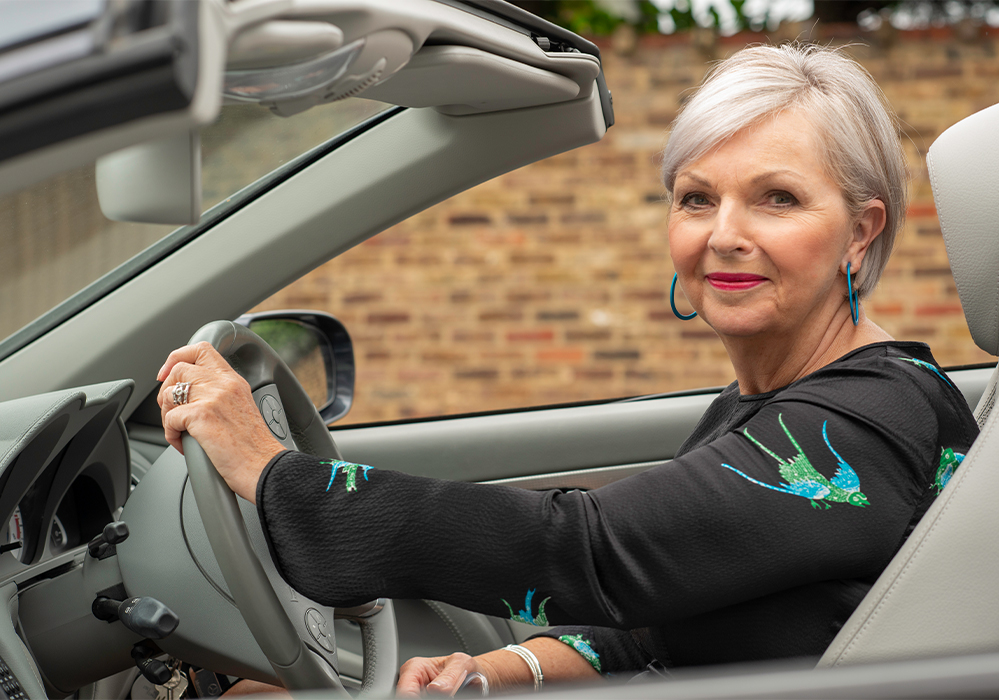 by Tricia Cusden
LFF Founder
Five years ago I wrote a blog called ‘Speed Freak Granny’ which generated over 400 comments. Why? Because I wrote about my lifelong love of sporty cars and how I was weighing up whether to replace the sensible Golf I’d had with a racy little convertible sports car. I knew in my heart of hearts that it was likely to be the last opportunity I had to own and drive something which made my heart beat a little faster and set my pulses racing with excitement.

I wrote in that blog: ‘You may find it strange that a 68 year old should even care what she drives, but cars have always been incredibly important to me as a potent symbol of freedom and independence and I don't want my advancing years to restrict my choices nor my sense of driving adventure.’ To a woman (almost), 400 of you encouraged me to ‘go for it Tricia - buy that sport’s car and have the fun that you crave!’

So, I threw caution to the winds and bought my dream car, and for five years I have had the most incredible pleasure from driving it, especially on my thousand mile trips to the south of France with the wind in my hair. But, five years on, much has changed.

Let me try to explain the evolution of my life in cars and why I have now decided to sell my beloved and very beautiful car. I have been driving for over 55 years, having passed my test at the first attempt whilst still at school. As I lived in rural Suffolk, being able to borrow my mum's Mini in the 1960s meant I was suddenly independent and able to escape to exciting places like Cambridge! Since then I have never been without some form of wheels. These have ranged from an early MGB GT, through the safe and sedate when the children were babies to the much more exciting Mercedes SLK sports car which I bought in 2004 when I was 57 years old. How I loved that car! Just seeing it parked outside my house by the kerb gave me pleasure and driving around with the top down during the warm summer months was blissful.

As a two-seater, that Mercedes became highly impractical when my four grand-children were born because I often needed to take them places. So I capitulated and bought a 4-door Golf which was extremely reliable and easy to drive especially around London where traffic crawls at a snail's pace.  On the day that the Mercedes sports car was collected after I sold it, I sat in it for about 20 minutes to say 'good-bye.' I felt incredibly sad, but I also promised myself that, if at all possible, I’d once more indulge my passion for a more exciting car if I possibly could.

One of the reasons I was determined not to let my age inhibit me when I did indeed get that opportunity, was seeing how many women of my age whose confidence in their driving ability had slowly been eroded by a number of factors. Maybe they’d never much enjoyed driving, so they’d started to restrict how far they’d go on their own. Some had husbands who always insisted on doing the driving, however long the journey. Some had cut down from two cars to one and that was now seen as ‘his’ car.  I felt that not ‘being allowed’ to drive was one of the more insidious ways that women are made to feel 'past it', and it seems to happen to us much earlier than it does to men. However, as a single woman I had no choice (and no-one to undermine me) and my confidence and pleasure in driving anywhere and everywhere did not diminish.

So, urged on by all of you, I threw that ‘sporty car’ dice one more time. For the past five years I have had the most inordinate amount of pleasure from driving perhaps the most beautiful car I have ever owned, another Mercedes two seater. And then, as with so many things, normal life suddenly came to a dramatic standstill with lockdown in March 2020. My sleek, stylish, sophisticated car sat outside my house undriven for weeks, and then months. It became unreliable with sporadic problems when starting it. Two different garages ran various diagnostic tests, but there were still intermittent faults, so if I went somewhere I was never confident of getting home again. Then the engine cut out when I was driving home from my daughter’s house and the wheels locked, which was terrifying. The last straw came when I had the MOT done and discovered that I’d only driven 2000 miles in a year and then it cost me over £500 to tax it, because of its CO2 emissions. I came to the sad conclusion that my car was an expensive, unreliable, barely used liability which was ruining the planet!

You may be surprised to learn that I had few regrets when I sold my sporty motor this time around. I’ve had a great deal of fun and my head is in a very different place as we enter 2021. Is it my more advanced age that is the difference or is it because my priorities have changed? I’d prefer to think that it’s the latter, not the former. I decided to choose ‘eco friendly’ rather than ‘gas guzzler’. I decided to choose four doors and a decent sized boot rather than a rather cramped interior. I decided to choose dependable rather than worry about every journey. Remember that Mini originally belonging to my mother that was my first car love in the 1960s? Well, I’m now the proud owner of a Mini Electric Hybrid, very zippy, very pretty and much kinder on the planet for the kind of driving around town that I mostly do, but with a petrol option for longer journeys. Rather than feeling like an old fuddy-duddy I prefer to associate my lovely new Mini with that adventurous teenager and think of my life in cars as having come full circle!

Here is the Bright Spots Programme and links for this week: ICYMI (In Case You Missed It) Last week Sally and Tricia talked about Colour: https://www.youtube.com/watch?v=UwkF75BlE9I All About Me: Angelique Tone up with Tricia and Lindsay Burrows You can also keep an eye on the weekly schedule of Events which will be updated every Friday at 5pm (GMT) here: https://www.lookfabulousforever.com/a-bright-spot-for-your-day